Behind (almost) every great film, is a meticulously planned and often surprisingly conform story arc. In the following, we’ll take a quick look at the mechanics behind storytelling. We will, so to speak, break down a film, or rather a story, into its very basic bits and pieces to see how these come together to make that awesome (or sometimes not so awesome) film.

Now what is a sequence? We all know the idea of a three act structure: Act I (The Beginning), Act II (The New World/Mission), and Act III (The Resolution). Well, sequences are what makes up those Acts. A movie can be broken down into eight sequences. Sequences one and two make up Act I, sequences three through seven make up Act II, usually with a twist, i.e. the character arc, happening at the end of Act II which leads into sequence eight in Act III; the resolution.

So, let’s look at a classic movie, The Graduate, and break it down. This is a summary of The Graduate according to IMDB:

Recent college graduate Benjamin Braddock is trapped into an affair with Mrs. Robinson, who happens to be the wife of his father’s business partner and then finds himself falling in love with her daughter, Elaine.

That’s the summary, but how can we break it down? The first question is ‘what does Benjamin want?’ He’s just graduated college, he’s returned home and the one burning question is what is he gonna do next? But Benjamin doesn’t have an answer. That’s his character’s want: He wants to figure out what he’s gonna do next. Next question: what is his character’s need? What is his character flaw? If you watch the movie you’ll notice one thing keeps summing Benjamin up – he doesn’t make decisions, he doesn’t take action. The opening of the movie is him on a moving walkway, everyone else walking by him, but he’s just being pulled and taken to his location. This sums up his character – he needs to walk, he needs to make a decision and take action.

Now that we have our want and our need, let’s break the movie down into sequences.

Sequence One – Will Benjamin get time alone, away from everyone? He keeps trying to escape the party, but people keep finding him. His only escape is to take Mrs. Robinson home.

Sequence Two – Will Benjamin call Mrs. Robinson? He’s been propositioned but will he actually take the opportunity. Ultimately he does call her. A whole new world opens up to him.

Sequence Three – Will Benjamin get a room? This might be a simple decision for a different character, but as we’ve established Benjamin isn’t one to make decisions. He actually has to be told by Mrs. Robinson to get a room. Even then he still has difficulty doing it.

Sequence Four – Will Benjamin sleep with Mrs. Robinson? Funny how we remember this as being what the movie is about, while really it took a while to get there.

MID POINT – Remember that montage of Benjamin by the pool and then with Mrs. Robinson to Simon and Garfunkel’s music? Yup, we’re in the middle of the movie.

Sequence Five – Will Benjamin take out Elaine? Mrs. Robinson didn’t want him to and he’s forced into it by his parents.

Sequence Six – Will Benjamin get Elaine back? He came clean about the affair too late and Elaine goes back to school. But Benjamin is starting to make decisions, so he goes after her, only to be told that she’s getting married.

CHARACTER TWIST – After finally making a decision and acting on it, Benjamin ends up literally banging on the glass screaming for Elaine at the end of her wedding. Symbolic for a man who couldn’t take action regarding his future – he’s literally screaming at it. In doing this he also triggers Elaine’s character arc to complete – she screams for him and runs away from the family and situation that’s always telling her what to do.

Sequence Eight – Will Benjamin and Elaine get away/get a ride? They hitch a ride on a bus and head off into the sunset. Our hero and his bride end up sitting together on the back of the bus. Benjamin is seemingly sitting next to his future.

As they drive away that famous look of “what now” comes over them. You could argue that this means he hasn’t changed or had a character arc. I personally don’t think that’s the case. Just because you manage to take action doesn’t mean you won’t have to take more. We’re all running to get somewhere and once we get there, we wonder where to go next.

So those are the sequences of The Graduate. Obviously it’s almost cinephile sacrilege to break a masterpiece like The Graduate down in such simple terms, but the lesson here is that we, as humans, are wired to follow patterns, anticipate, ask questions and search for resolution. That’s why (again, almost) any great film you break into acts and sequences will follow a certain pattern. Such are the mechanics of storytelling and there’s a lot to be learned from tearing apart your favorite stories and breaking them down into impossibly simple building blocks.

The Storyteller Series: Writing, Collaborating and Getting Past 1st Draft 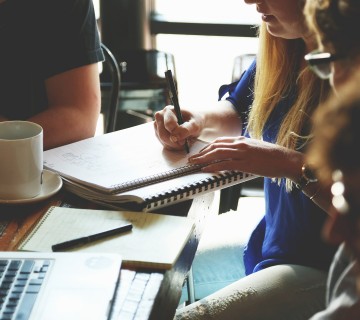