Most of the movies making a box office smash are rip roaring rides. Action sequence strung after action sequence. The special effects have become so lifelike that its almost impossible to tell the practical effects from the VFX. The actors themselves seem to perform a stunning array of physical stunts. Weapon work, falls, stunt driving, rolls and tumbles – its easy to begin to believe that these things are really happening in front of us. The illusion is as near to seamless as it has ever been.

I was fortunate enough to have an experience a few weeks ago shooting a complex and involved action scene for a film. I was kidnapped and pulled out of a building after a massive explosion, I got to kick some ass, run and dive, steal a van and peal out of a parking lot, get shot, inject a man with a syringe, and watch a man fall down a flight of stairs. This was the first time I had been a part of a shoot like this, and not only was it a blast, but it was done on a very low budget. Here’s how it was all done.

First of all, lets talk about on screen explosions. Or at least the one I witnessed. The scene called for a building exploding. Windows broke, the door busts open, and a group of scientists are pulled out of the rubble.

I watched the pyro team set up a big air machine in the doorway of a building façade on New York Street in the Manhattan Beach Studio lot. They filled it with a grey powder. When the director called ACTION they pressed a button and the air machine fired off a loud noise accompanied by a cloud of dust and debris shot out of the machine. The building itself remained unharmed.

Glass fell out of a window onto one of the actors as the explosion happened – this was achieved by a bucket of candy glass, which is small squares of rubber made to look like shattered glass, poured from above and thrown over the actors on the street below. The effect is surprisingly realistic, and avoids any harm coming to the actors, or having to worry about shards of glass for the rest of the day.

The next sequence involved a team of assassins pulling me and another doctor through the smoke and out into the street. The smoke from the initial explosion had cleared as they set up this new shot, so in place of the grey dust from the explosion effect, they now set up a smoke machine in the doorway to mimic the previous shot. When all of the actors were set in the awning, they filled the doorway with smoke from a small smoke machine. When the director called action, I was pulled down the stairs by an assassin holding my arm. He had a gun to my ribs. I was grateful he was there with me, because I couldn’t see the steps to save my life, and without him to lean on and guide me down the stairs I probably would have fallen.

The stunt performer was wearing pads underneath his costume that were so thin they couldn’t be seen. Before we did the first take, the Stunt coordinator came to speak to us and talk us through the stunt that would happen after we got down the stairs. Basically, we would tussle a bit, and I break away and elbow him in the face. The elbow to the face was actually an elbow to the air about a foot away from his face, but with the right angle and correct execution from me and him, it looked like I had clocked him pretty good. At the moment I broke away from his grasp, the director yells “BANG” and the stunt performer who had grabbed me reacts as though he got shot. He throws himself up into the air and falls into the stairs, rolling down three of them and landing on the concrete. It looked incredibly painful and real, but he got up and performed the same action four more times without injury or complaint.

After he fell down the stairs, I grabbed a vile from his pocket and ran down the sidewalk as one of the other assassins fired a machine gun after me. Bullets ricocheting on the pavement next to my feet as I ran. This was achieved by the stunt coordinator standing just off camera with a pellet gun containing dirt pellets. As they hit the ground they would disintegrate into powder, giving the effect of bullets chipping at the pavement and the ground. Even if one of them had hit me, it wouldn’t have hurt.

At the end of my run down the pavement, I had to leap and dive underneath a tree as another man took a bullet aimed for me. There was a pad hidden beneath the tree off camera to catch my fall, and the stunt team talked me through the movements to make the fall both safe and realistic. We moved through this sequence several times to get different angles, and then it was time for the work with the van.

I was nervous going into this sequence, because I had never driven a van before, let alone driven it while doing a 7-page dialogue scene and being shot at. I had a stunt double on the set who, in wider shots, did all of the more extreme van work. She would do the fast driving and peeling out. She slammed on the breaks and skidded to a stop before rounding corners.

When it came time for me to get behind the wheel, they had rigged a big square light onto the windshield directly in front of my face to light me for the shot. This made it incredibly hard to see out the windshield. The first action was me jumping into the car, grabbing the keys, and peeling out as bullets batter the side of the van, and one of them hits me in the shoulder. I didn’t have to drive fast, but I had to do a lot of fast thinking, acting and reacting very quickly, while also trying to steer the cumbersome van through the narrow lot and around the corner.

The camera, for my coverage, was rigged to the driver’s side window, and the director was in the back of the van with a monitor. We drove laps around the lot, me quickly learning the route and getting more confident in my driving, though still nervous about the bright light shining in my eyes. The lines, with all this action going on, were falling right out of my head even though I had them completely memorized. Because we were on such a tight schedule, we didn’t have time to spend on getting me comfortable behind the wheel before we were shooting. We were losing daylight, and we just had to do the best we could with everything being thrown at us all at once.

The final shot of this sequence involved an actor dying from a gun shot wound and me injecting him with a vile of liquid. Tubing was rigged underneath his shirt with fake blood that seeped out slowly as the scene went on, giving the illusion that he was losing a lot of blood. After we stopped the van, they reset the shot and I jumped in back. There were two syringes in my pocket. One, a real syringe that I had to stick into a vial of liquid and fill, and then a fake syringe with a needle that would push up into the syringe itself when pressed against the actors neck and look like it was going into his body without actually hurting him.

I had to fill the real syringe, and then set it off camera, grab the fake one, and jab it into the actor’s neck. Because they were identical, the actor being injected held the fake syringe for me, so once I had set down the real one, I could grab the fake one from him and both of us would know I had the right one.

As this was happening, the pyro team had rigged a strip of spark lights along the back wall of the van. In sequence, they went off one after the other creating noise and white sparks that looked like bullets hitting metal.

There were a lot of moving pieces involved in this 13-page sequence – and each one essential in pulling it off in a realistic way. The stunts and pyro effects were incredible to witness first hand, and getting to glimpse behind the smoke and mirrors of some of these common and impressive effects helped me to see that there are ways to accomplish realistic effects on a lower budget. Doing some stunts myself, and then seeing the more impressive stunts done by the others was humbling and exhilarating.

It really is magical to see how a sequence like this is shot. What we see up on the screen is one big magic show – we are fooled into believing that what we are seeing is real, and that is the beauty and the magic of filmmaking. 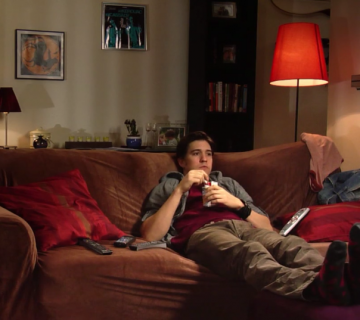 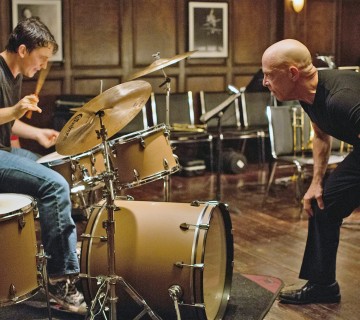 Storyboarding For People Who Can’t Draw 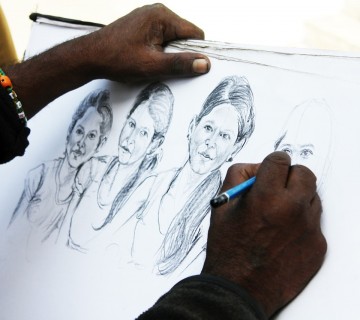