As with for any other aspect of filmmaking, the key to successful visual FX lies not only in the execution, but perhaps even more-so in the planning.

And while certain aspects of camera movement, dialogue, lighting, etc. can be hashed out on set, sometimes just minutes before the cameras are rolling, you don’t want to take any chances when it comes to pulling off those visual FX that are really gonna sell your story. It’ll be too time-consuming and if a certain effect is not playing on camera the way you anticipated, you might not get the shot you need – let alone the shot you want.

In the case of The Storyteller there’s a magical realism that imbues the story with a certain mood, sometimes even moving the characters forward, informing choices and plot. In certain scenes, this magical realism is manifested by fairies. But how do you successfully pull off showing fairies on camera, when you’re working on a limited budget and don’t have access to the bells and whistles of high-end CGI? Or perhaps more importantly, when you don’t want to use high-end CGI, but rather have your actors interact with practical effects on set? Well, you think, then you experiment and then you plan accordingly.

When faced with the challenge of creating organic, realistic and practical fairies for The Storyteller, the team (producers, director, writers, actors) came together for a visual FX test – and 20 Questions Film tagged along for some behind-the-scenes video:

Let’s break it down. The filmmakers wanted to create a small, moving light source, ethereal and whimsical, effectively coming off as a fairy, fluttering around – and interacting with – the actress. They wanted to add visual detail in post-production, but to have the light from the fairy play off of the actress’ face realisticially and organically. They also wanted to be able to capture the spontaneous reactions and movement by the actress, as she responds to the fairy (and in some scenes several fairies) flying around her. This is how they went about it:

Pulsating single-LED lights were to act as the fairies. Removing the outer plastic shell of the lights, leaving only the tiny LED diode and the battery, decreased the footprint enough for the camera to only pick up the light and not the hardware. String was used to hang the lights from a C-stand – and later to be controlled by the producers, moving the lights around the actress and camera. When it comes time to shoot, the string will be replaced by clear fishing line, which won’t show up on camera or will be easily edited out in post. Plastic wrap (the ordinary kitchen variety) was used to experiement with grouping together several LED diodes into a single light source, while also slightly changing the way the light breaks on camera, changing its properties like hue and brightness.

Hanging the light from a C-stand allowed them to have a controlled height of the light when moving the LED around, making it easier to frame on camera and to reset between takes.

One of the most important reasons for the FX test was to see how the light would bounce off of the actress’ face while moving around. This gave the DP a chance to experiement with exposure and focus in order to achieve the effect needed. 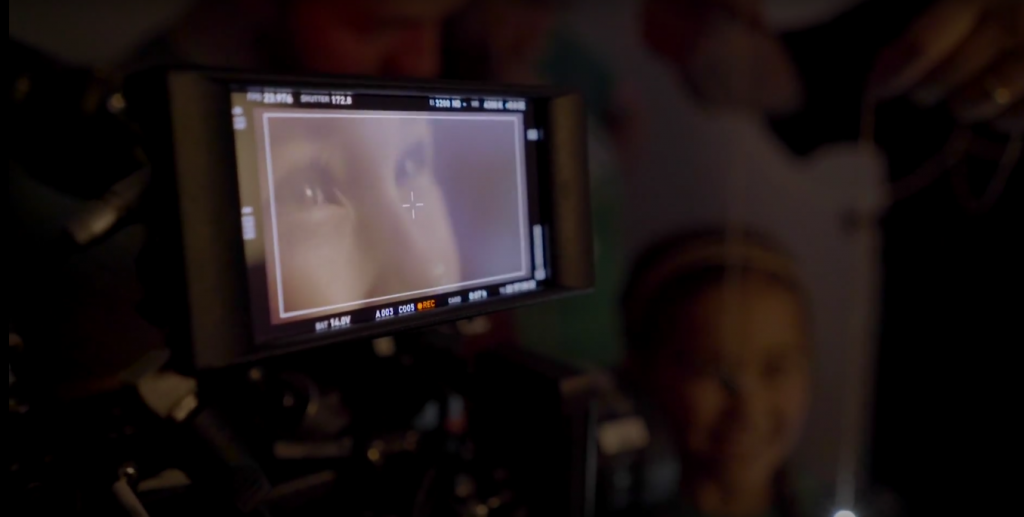 Experimenting with lens whacking as a way of creating dream-like visuals with light leaks and tilt shift focus also gave the filmmakers an idea of how to move the fairy lights around in a realistic, organic way.

The take-away from a day of experimentation? Some things work and some things don’t. Some things will require additional planning and experimentation. Regardless, a day or two spent in pre-production will no doubt save the crew precious, stressful hours on set, which may again be the difference between getting the shot they need or not. It’s worth it.

We’re following the production of the feature film, The Storyteller, from idea all the way through to distribution. Learn from the process with real-world examples right here.