If you haven’t seen it already, please stop reading this and start watching Birdman immediately.

In the film, Michael Keaton plays a washed up actor trying to get back on track by adapting, directing and starring in a Broadway play. The story is good and the acting is brilliant, but the best thing about Birdman is really the production design. Blending seamlessly with an incredibly ambitious cinematography (the whole film is – more or less – shot to look like it was done in one, one take), the production design does an outstanding job of bringing the viewer into Riggan Thompson’s (Michael Keaton) world.

The scene that best exemplifies this is a pivotal scene in which Keaton’s character rushes through Times Square in his underwear. You’ll catch a glimpse of the scene towards the end of the trailer:

Let’s break the scene down.

What the scene does so brilliantly is showing us how fragile, yet determined, Keaton’s character is, by having him rush through a crowded Times Square in his underwear, after accidentally locking himself out of the theater. In a conversation with Yahoo! Movies, Birdman production designer Kevin Thompson explains how they managed to pull off a scene like this in one of the most crowded places in the world.

First of all, it was shot on location.

Thompson says, “It had to be done late”. Well past midnight, at 2AM, when they shot the scene, Times Square was still very much alive with people, but less so than during the evening hwre shooting a scene with a well-known movie star would have been all but impossible.

They controlled the chaos.

While much of the faceless crowd is actual Times Square visitors, they managed to control – and use – the chaos by dressing the film crew as pedestrians and placing them in the crowd, along with the hired extras, in a way that gave them a bit of a barrier between Keaton and the crowd.

They used a marching band to energize the crowd.

“Having the drummers there really assisted in gathering and holding the crowd, and then also holding space along one side of them,” Thompson said. “It created an energy that helped, I think.”

For the viewer, the marching band simply adds to the chaos of the scene, whereas in reality it helped manage the crowd and keep the energy up when shooting at such a late hour.

The actor was on board.

Keaton’s character is the sole focus of the scene, so it was obviously important that he was 100% on board with stripping down exposing himself – physically and emotionally – in front of hundreds of people. Here’s his take on it, as explained to David Letterman: 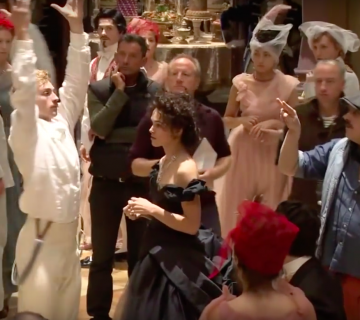